Note: Subscribers reading this in an email, you can on click on the title above to go to the actual web site page for better layout and larger images.

Photo above or at left, taken from the route of the Padre Trail looking back at Sonoma Valley.

Finding the course of the trail

Whenever locals went from Sonoma to Napa in the 1830-50s, whether by the trail or by the lower route around the end of the ridge, it was a commonplace occurrence, hardly worthy of mention. They basically wrote “Went to Napa and returned today,” much like contemporary Bay Area residents would write “Went to Tahoe this weekend.” We would not feel the need to mention that we drove a car, that we took Interstate 80 or State 50 to get to whichever end of the lake we wanted (or, for that matter, that it was a lake), or that we stopped here for lunch. They did not leave us information like “Walked (or rode) 15 miles on the Padre’s Trail, which starts near this creek, then up over the ridges, down the other side, did my business in Napa, then walked the 15 miles over the trail back.”

Only a tourist or other visitor writes about such trips. It is all new to them, and fortunately for us there was one such visitor to Sonoma in 1846, a U.S. naval lieutenant who arrived with the conquering forces and took over command of the area. And while his account lacks landmarks—likely because he did not know them—we can get a real sense of what the countryside was like at the time.

A new “Ride of Revere”

The visitor’s name was naval Lt. Joseph Warren Revere, as in that Revere, Paul Revere, who was the lieutenant’s grandfather. In 1846, however, no one would have recognized the name. The grandfather’s midnight ride during the early part of the Revolutionary War did not become popular legend until fifteen years later in 1861, when Henry Wadsworth Longfellow wrote “Paul Revere’s Ride.” Published in the Atlantic Monthly, on the eve of the Civil War, the poem was written to remind Americans of their common battles almost 100 years before, in hopes of averting the coming disaster. Later, it became a rote memory exercise for American school children, and this brought Paul Revere the small part of popular knowledge he occupies today.

Lt. Revere wrote a monograph published in 1849—when the Gold Rush had piqued many people’s interest about California—entitled “A Tour of Duty in California,” in which he recounted his two years there during the transition of power from Spanish Mexico to the Americans.

Off to explore the area

Revere was put in charge of Sonoma soon after the Bear Flag Revolt and the cessation of the war with Mexico. After organizing the post and his ragtag band of American “soldiers,” Revere found he had “abundant leisure” to explore the area from Sacramento to Santa Cruz. He decided to first visit “The Lake,” now known as Clear Lake, one of two large natural lakes in all of California (the other being our earlier destination of Lake Tahoe). He had heard of several Native American tribes living there and wanted to make the first official U.S. contact with them.

Before he went, he called a meeting with Native Americans from Clear Lake who were working on Sonoma-area ranches.

“Some of them,” he wrote, “[were] ornamented and armed in savage style, some in shabby shirts and trousers, and one with nothing on save the very primary article of civilized apparel.” Several were recruited to join his trip. Among the other men Revere detailed to join him was the Sargent John Chiles, who already had his own land in what is now Chiles Valley, northeast of the Napa Valley. Revere described Chiles as a man of contrasts: “A gentleman farmer, born in Tennessee” and a “harum-scarum, half-horse, half-alligator sort of genius, and withal a right good woodsman.”

His description of the journey from Sonoma to Napa valleys brings imaginings of a time when this area was as empty of white men as perhaps the Alaskan wilderness is today. It was a trip into a void, but through much natural beauty, and where you could feel there was no one for miles and miles in any direction, perhaps as you would feel on a hike in a gigantic national park. 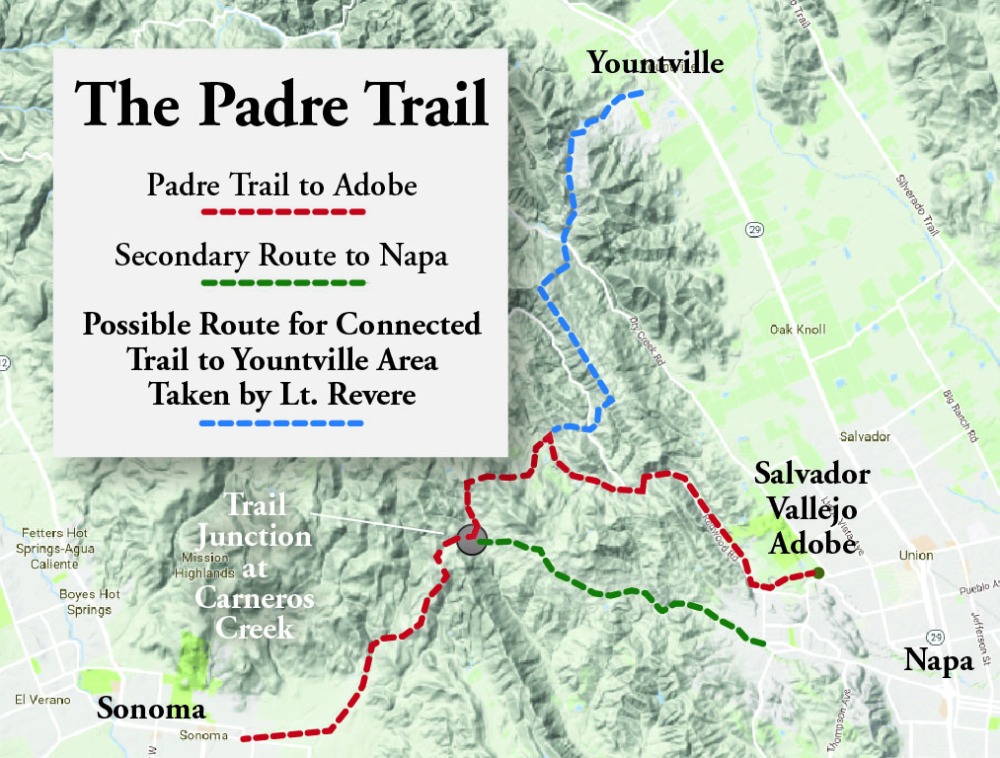 Starting out from Sonoma

“We struck out into the tough mountain path [the Padre Trail],” wrote Revere, “which leads over the ridge dividing the valley of Sonoma from that of Napa. After a pleasant afternoon ride across the hills, in the shade of noble trees, occasionally crossing on the way some pretty upland glades [one of those likely the headwaters of Carneros Creek], we suddenly reached the crest of the mountain, and beheld the all-beautiful Napa Valley laid out at our feet.”

“These rapid transitions,” wrote Revere,” are characteristic of the scenery of California. After pursuing for some time a rugged and stoney mountain path amidst gnarled and stunted hardwood trees, you attain, when least expected, the summit of a mountain from which you gaze with rapture—if you have an eye or a heart for nature—upon a broad and level valley, studded with clumps of verdant oaks, and dotted with herds of grazing cattle, which seem in the distance, no larger than sheep.

“Or emerging by a steep hillside path, from a rocky and shaded glen, through which runs a streamlet shrouded and almost hidden by the undergrowth, the traveller is surprised by a glorious view of the bold outline of distant hills of a rich greyish or purple hue, the middle ground of the intervening landscape being perhaps varied by a basaltic rock formation broken into a hundred fanciful towers and battlements.”

His first view into the Napa Valley seems to be from the hills between Dry Creek and the valley proper, west of his destination of George Yount’s home. There are no maps of the trails inside Napa County from that time, but taking into account terrain, destination,  common sense and the fact Revere does not mention a visit to the Vallejo adobe bunkhouse, the group may have left the Padre Trail proper at Redwood Creek (see map above) to take another trail that led more directly to Yount’s house (this would have been the same trail, but the reverse course, taken earlier by the Bear Flaggers discussed in With Joe Calizzo on the Padre Trail).

Even after the beauty of the days’ ride, the Napa Valley stunned him. “The scene now before me was one of unsurpassing beauty. The infinitely varied outlines of the lofty mountains lying beyond the valley; the grotesque appearance of the broken and ragged crags of  balsaltic rock [possibly Stag’s Leap]; the quiet river winding through the level plain at our feet, its banks distinctly defined by a long line of willows and other trees of larger growth; the gracefully undulating outlines of the smaller hills, which like the far-spreading plain itself, waved with a golden harvest of ripe grasses made all the more golden by the ‘living light’ of the setting sun; the scattered clumps of dark green oaks and miniature herds of grazing cattle—all combined to paint a landscape worthy of a country whose natural opulance is matched only by its natural grandeur.”

There is another page of this effusion about the beauty of the Napa Valley—well-deserved in my opinon—and more about the general fantastic promise of California: “There is no reason to believe that California will hereafter be dependent on no other country for the necessaries of life….Indeed it is difficult to name any product of the earth, whether it be to eat, drink or wear, which California cannot yield, while her mineral wealth excites the astonishment of the world.”

The book came out in 1849 and one can almost imagine an editor inserting that last line to make the tale even more relevant to its time and its probable primary reader: someone considering a move to California at word of the gold fields discovered in the central part of the soon-to-be-state.

Revere went on to a varied military career for both Mexico and the United States. He fought as a general in the Union Army and was court-martialed for a three-mile retreat at the Battle of Chancellorsville that he characterized as a “regrouping effort” after he had assumed battlefield command. He was pardoned by President Abraham Lincoln but became a persona non grata for the government and the military. For more information on him and his post-Civil War adventures you can start with his entry at Wikipedia.