After all the research, I wanted to start exploring parts of the Padre Trail, to figure out where it was, in hopes of one day hiking the whole thing. It all still exists, but nearly every bit of its path has been improved, and later bulldozed, into ranch roads and fire roads. I asked Warren Kubler if he could help me out. He had already shared a USGS topographical map he had marked himself with the route.

“We can do part of it in the Jeep,” Warren said. He owns a school bus yellow WWII vintage Jeep that has been well used over its life. On the dashboard is a small sign that says “Got old too soon & smart too late.” Warren assured me the sign was already there when he bought the jeep decades ago. We set a date to follow the trail over from Carneros Creek to the Sonoma side, through the property of a man named Charlie Cooke and his family. Maybe we could even come back on the Old Sonoma Wagon Road (now Gehrecke Road) back over the ridge to his place. 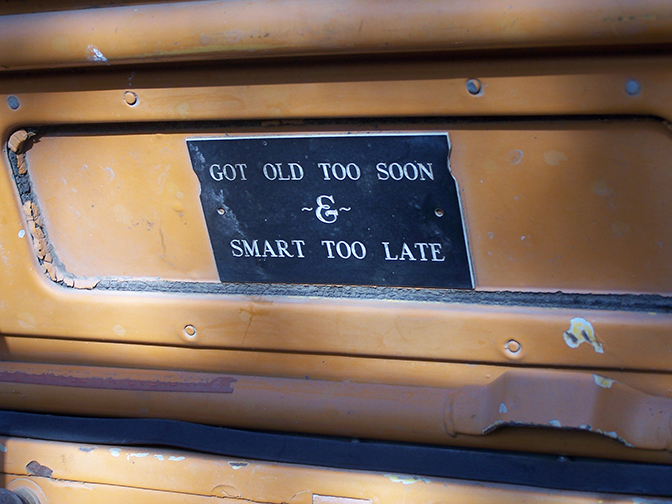 We met one Friday morning in front of his barn, fired up the Jeep and headed up the newly graded road toward the ridge. We needed to work our way downridge about a mile along the country line before we would hit the path of the trail.

“Today, we’ll start out on Cardiac Hill,” Warren said as we tooled up the road.

I looked at him, but he just downshifted as we took a left on a dirt road I had not seen before, just downhill from the Old Sonoma Wagon Road. I could see the other road only 50 yards off through the sparse trees, angling off along the very top of Nathanson Creek, out of sight, where it would start a long winding descent of 1,500 feet to the Sonoma Valley floor.

On our own road, we climbed a rise and came out on top of a crown bulldozed clear of the small trees that had grown up after the last fire. Tall piles lined the periphery; the white rocky soil was exposed. It did have the clearest view of both the Redwood Canyon side and the Sonoma side I had seen on our trips. The view was laid out below, from the bay across the Sonoma Carneros region, to Glenwood and beyond. (It is the same view that I have since seen many times from Maggie’s Peak in the Archer Taylor Preserve and one of the most dramatic views in Napa County.)

After we had taken in the view, I figured Warren would make a U-turn and head back somewhere to find this “Cardiac Hill.” Instead, after he started up the Jeep and put it in first, he drove straight ahead, directly at a wall of brush at the edge of the cleared area.

This was my third Jeep ride with Warren, so I trusted Warren implicitly in matters of the Jeep (I guess I had to). But I thought this might be a bit wild, taking on a solid line of brush like this. But then, fifteen feet from the line, I noticed that while the wall seemed solid, at ground level, directly ahead of us, there were only two small stick-like doug fir trunks with nothing else between them, and I knew that small cleared space was the jeep trail now overgrown, but still there.

We ducked behind the windshield as he guided the Jeep into the fir branches and found the road, and then the crawl down Cardiac Hill began in earnest. We rumbled over ruts and rocks, slipping down the steep overgrown grade. The Jeep squirreled back and forth and we held our folded bodies forward, still hiding behind the windshield as the brush caught the frame, bent, then whipped past us, inches away.

Finally, down at the bottom of the grade it leveled out, but we still plowed through bushes that had overgrown the road in the past few years. We drove through a high, shallow valley and a red-tail hawk, perched on a small tor on the hillside about 150 feet away, watched us work our way across his view. We dropped down, crossed a creek and then started a climb up a horribly rutted road, finally making the ridge again. There we found the county line road that Warren had made, relatively smooth and open, though crowded at the edges. We sped along at 10 miles an hour, and then slowed as we approached a spot where a small oak had fallen across the road with barely enough room for the Jeep to pass beneath.

One lower branch of the tree, about four inches in diameter, held onto the windshield near my head and we inched into it. It did not bend and did not want to break either, but we kept moving and the pressure built. This thing could take off my head, I thought and ducked my head even further forward. I looked over at Warren. He was eying the branch over the back of my head as the branch finally prepared to give and pass with fatal speed over me.

I laughed and nearly sat up. Such was his droll sense humor that I thought he was talking about how the branch could kill me, rather than telling me what had killed the small tree itself.

The branch finally came loose and shot by my head with a force I did not want to think about. Sudden oak death indeed, I thought. And we were not even to the Padre Trail.